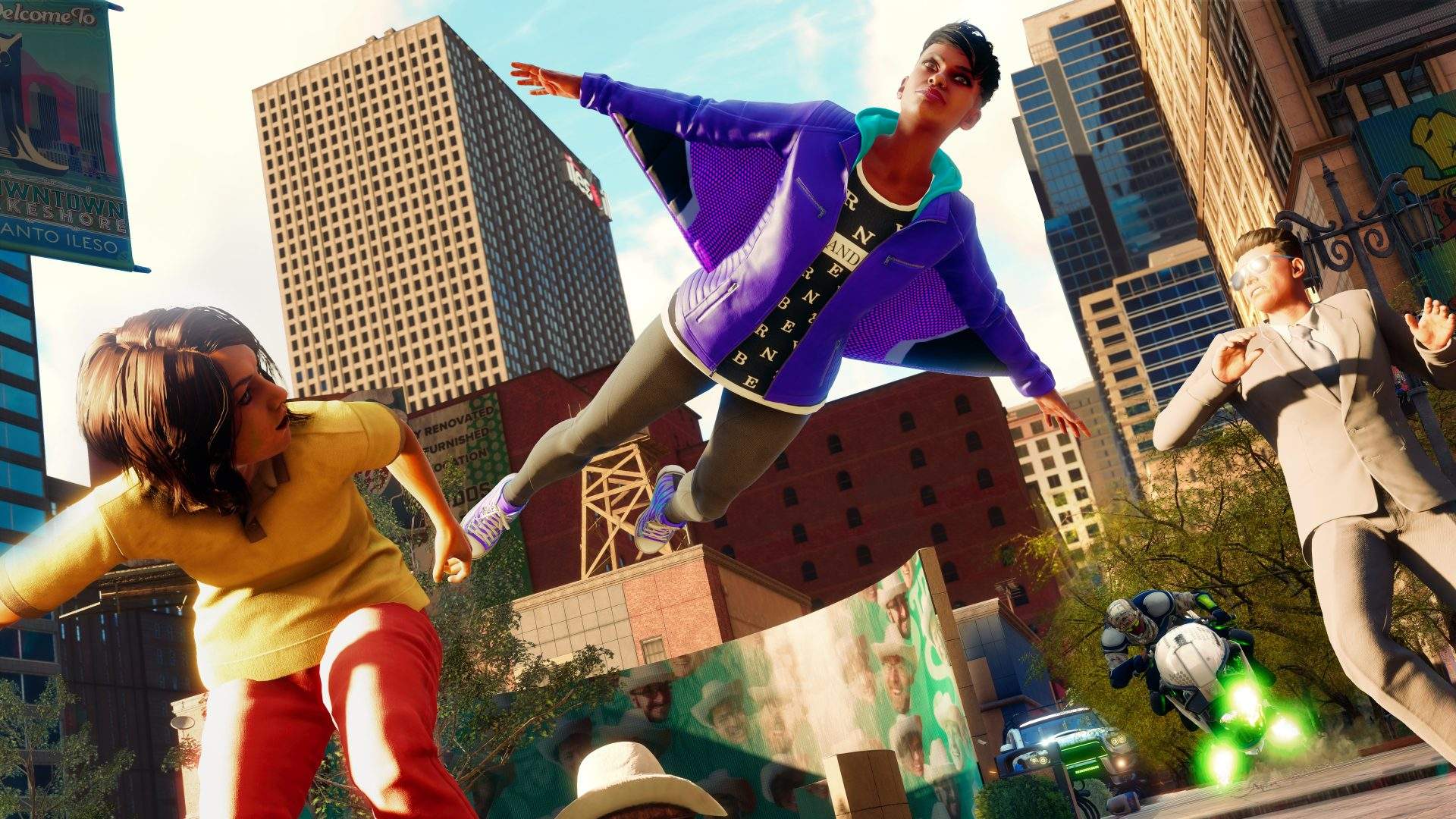 The Saints Row series never originally piqued my interest when it arrived in 2006, when ‘Grand Theft Auto-clone’ was the popular buzzword, and every AAA studio needed an open-world crime adventure. It wasn’t until the Saints’ glitzed themselves up and saturated themselves in the spunkiest neon purples in Saints Row The Third that I finally came around on the series. As the series continued to develop a personality to distinguish itself from Rockstar’s grand theft behemoth, The Third crystallised what is now the recognisably irreverent, hyper-slapstick and over-the-top playground that you’re in charge of. The Third’s legacy of auto-tuned pimps pulling carriages, dildo bats and laser guns, and satire that often tips into self-parody meant that I could not wait to see what hilariously distasteful shenanigans Volition had in store for this rebooted gang. When the bar for the bizarre is set so high, Volition eventually had to start flying to reach it, by introducing superhumans and aliens in Saints Row 4, which meant leaving the planet and ending up in hell for its subsequent spin-off. These follow-ups to the Third’s peak Grand Theft Auto spoofathon meant many of the wild tools, vehicles, and satire departed too far from the third game’s near-perfect marriage of comedy, creativity, and style.

Thankfully, sitting down to a hands-off preview of Volition’s new Saints Row reboot has me confident that the series has rediscovered its irrelevant X-factor. With no superpowers in sight, our grounded Saints are once again bombastic followers of your ludicrous whims, with a bigger and more customisable toybox of violent swag at players’ fingertips.

With co-op returning, share the shenanigans with a friend

As something of a series course correction, Saints Row offers a more ‘boots on the ground’ experience that straddles Saints Row 2 and The Third. As the Saints are once again building their criminal empire from humble beginnings, players will have access to the Empire Table at Saints HQ. When accessing this table, an overview map of Santo Ileso appears, showing properties the Saints have claimed and opportunities for expansion and enterprise. Here players can launch ‘criminal ventures,’ which can be initiated by ordering the takeover of a vacant lot. There are loads of opportunities for expansion, such as sites for weapons storage and gun running, to setting up a location for insurance fraud. Your investments at the Empire Table can increase the Saints’ hourly gang income, which can then be claimed by your boss to spend at your own discretion.

The Saints’ revenue raising courtesy of insurance fraud sees the return of wholesale destruction in the mayhem missions. These missions are an over-the-top arcade interlude from the main missions that involve you and whichever mates you bring along causing copious amounts of property and vehicle damage (with a side of grievous bodily harm) to be achieved in a set amount of time. As the streets erupt in exploding cars and rocket-propelled grenades, your insurance company turns an accommodating blind eye as the dollar values light up across the screen. This is a great practice scenario for putting your gang’s arsenal of street warfare to the test.

Watching this showcase, I was struck by how familiar this all looks to Saints Row 2 and 3, from the menus and interface to the animations and physics. Returning players will be able to hop on this bicycle with little introduction required; the player’s boss, regardless of how creatively constructed they may be, moves with the same buoyancy and comedic, rag doll disregard for physics as in previous games.

Go fast, jump high, and leave pursuers in the dust

Revamped from past entries is the melee combat. Saints Row was never really known for its fisticuffs, instead favouring repurposed sex toys with which to thwack dissenting gangbangers and cops. Bar brawls and wrestling finishers return with a renewed vigour, and  Saints Row now has hand-to-hand combat similar to Rocksteady’s Batman Arkham games. Chaining blows and watching for counter opportunities now make your boss a whirlwind of chaos, with added dexterity. Adding to this series’ equippable finishing moves, a further fleshed out roster of special moves and combos will be featured to spruce up your ham-fisted negotiations.

To show off the grounded gang warfare of the series’ earlier titles, I was delighted to see that main missions retain the hook of having the player commit outlandish, often petty crimes that double-down on the slapstick humour that Volition does so well. Taking the piss in the preview, the boss showed off some of the non-vehicular utility of the installable towbar. The next minute, the player is shit-whipping some poor sod in a portaloo around downtown Santo Ileso from a cable attached to the back of their sports car. This low-brow slapstick that teaches the players about how they can creatively bend the game’s physics and systems opens further comedic chaos when players realise those towing cables can make a wrecking ball out of much more than vehicles and unfortunate pedestrians.

The cops will remain the bane of the Saints’ existence in this entry as much as rival gangs, but on your mission to defun [sic] the police, expect a few crashed cars and short-lived chases. But remember, you are a resourceful Saint with tricks up your sleeve. Should the fuzz set up a blockade that the player ambitiously but errantly crashes into, expect that the crowned saint will go flying through the windshield. Fortunately, Saints can equip a deployable wingsuit for such situations – meaning a peaceful cruise through the skies as you leave the flashing lights behind.

When the boss touches down again, perhaps they want a bit of anonymity from their notoriety. No problem, players can also change their entire boss character via a quick pause menu. Head to toe, outfit, voice, gender, the entire character can be tweaked or swapped out for an entirely different preset or community creation on the fly.

As somebody who felt that the later entries in the Saints Row series suffered from trying to outdo the zaniness of the titles before them, it is a welcome relief to see a return to the peak satire and creative arsenal approaches to missions. Whereas Saints Row 4 evolved to have the Saints’ boss as a superhero that had no use for conventional vehicles or weapons, the massive roster of both that is featured in this grounded entry is a delight.

The Saints have learnt some new talents during lockdown

In a year lacking a blockbuster AAA open world with no shortage of humorous antics to spare, 2022’s Saints Row has all the comedic mayhem I could ask for – and surely more for the finding.