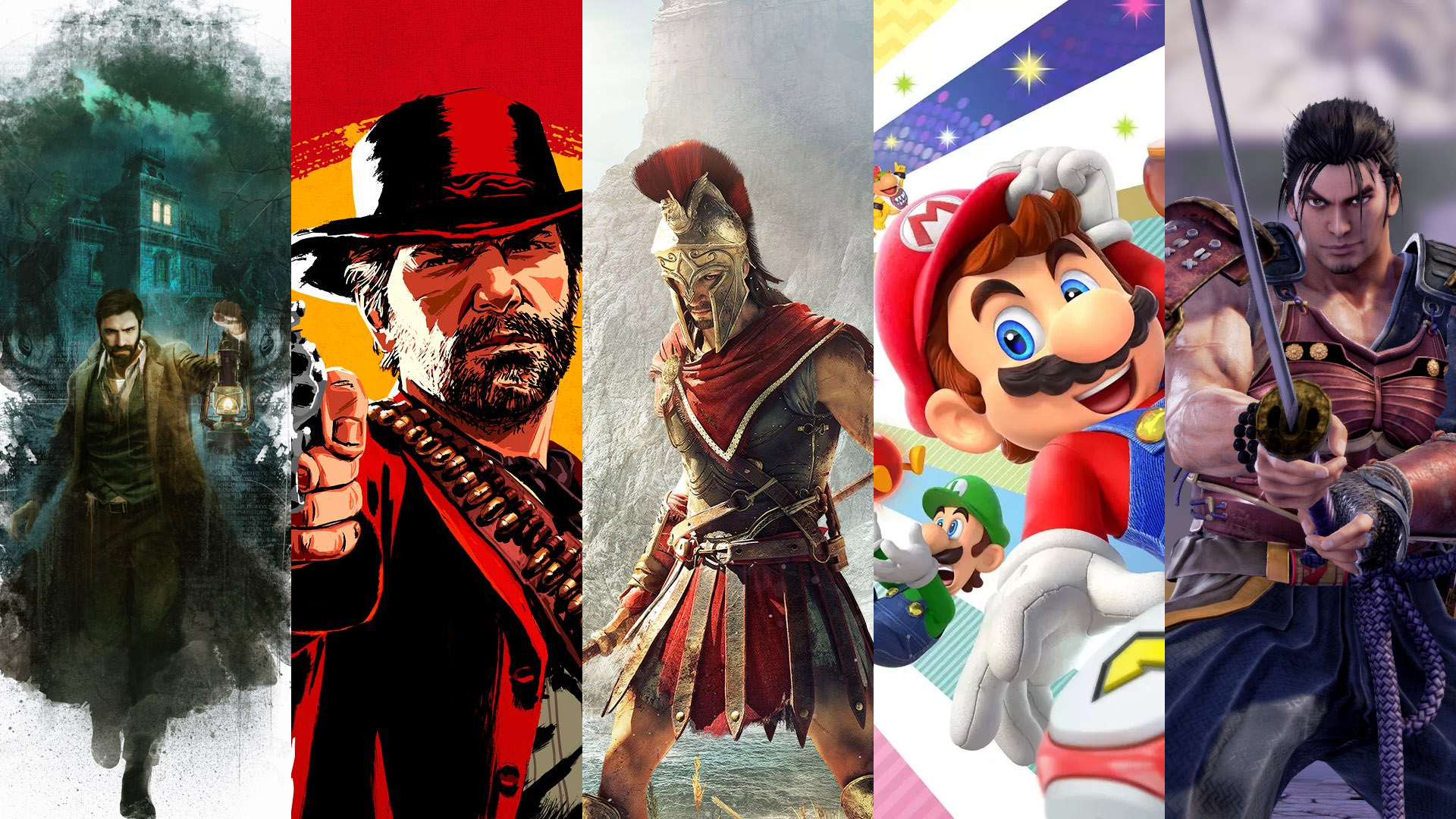 October 2 – The Surge: The Good, The Bad and The Augmented (PS4/Xbox One/PC)

October 2 – Batman The Enemy Within: The Telltale Series (Switch)

October 12 – The World Ends With You: Final Remix (Switch)

Many gamers are likely licking their lips while simultaneously adjusting their ever-tightening jorts (hopefully in the privacy of their own home) as they gaze longingly at October’s offerings. Gearing up towards the end of the year their are some AAA monsters lurking in every nook and cranny of October, with the likes of Assassin’s Creed Odyssey, Call of Duty Black Ops 4, Soul Calibur VI and a title I’ve never heard of called Red Dead Redemption 2 (these damn kids and their love of cowboys, am I right?). The Switch is also getting plenty of love, and we’ll also finally get to see whether WellPlayed’s Managing Director Zach Jackson’s curse of hyping a game only to find out it’s terrible will claim another victim in the form of Call of Cthulhu. So what’s got the WellPlayed team quaking in their jorts?

Strap yourselves in, kiddos, we’re in for a positively stacked month of releases. Ringing in October for me is Fist of the North Star: Lost Paradise, a game that I’ve been playing for review for WellPlayed over the last week. You’ll have to read the full review to get my thoughts on it but suffice it to say that both anime and Yakuza fans should definitely be paying attention.

Switch owners have a lot to be excited about, too. Between a brand new Mario Party, and a bunch of remasters of absolute classics like The World Ends With You, Luigi’s Mansion, Valkyria Chronicles and Dark Souls, there’s a tonne of diverse experiences for Nintendo fans to sink their teeth into this month.

Then comes along a little game that maybe isn’t on everyone’s radar, not least because of its roots in the now-mostly dead ‘toys to life’ scene, but I’m personally pretty pumped for Starlink: Battle for Atlas. After getting hands-on a couple of times in the past I’m very confident in how much fun the game is to play, and the toys themselves look and feel fantastic so I’m 100% on board.

Oh, and then there’s something happening on October 26th. Some cowboy game. I may or may not have booked time off work around that time, which may or may not be related.

Good gravy on a giddy goat; feels like an eternity since I played an actual SoulCalibur game – not some weird online F2P doover, not some ‘time-skip’ weirdo universe, but just a good old-fashioned ROMP on the stage of history. The teaser marketing so far has painted a lovely picture of familiar faces coming together for good ol’ fashioned weapon-based biffo. A lot of people associate SoulCalibur as a booby-brawler, with heavyset women defying gravity as they pummel each other (and the odd burly man)m but the truth is the game has genuinely captured a fast and frenetic playstyle that translates beautifully into the arena-based fighter sub-genre. Many a late night were spent settling grudges at the end of my long pole (Kilik’s weapon of choice) and countless rivalries between myself and mates flared up and were quashed – a legacy that the series is long overdue to revisit. Call me MUSTARD baby, because this new dad is KEEN.

Beyond that – a new Megaman game? And it looks incredible? Considering I had lost all hope for an authentic Megaman experience after the character’s creator Keiji Inafune managed to mega-botch his standalone effort, Mighty Number 9 (seriously) I am amazed to see that perhaps the true magic of the blue bomber was not lost with him.  And I can play it on Nintendo Switch? Get in my pants, you saucy minx.

If you know me at all, you know that I love all kinds of survival crafting games, so imagine my delight when Beam Team Games announced that they’d be bringing Stranded Deep to consoles. Then, imagine my deep sadness when, a day later, their publisher closed its doors and cancelled all future projects. It sounds as though BTG are really trying to secure another publisher though, and I really hope they do because this little gem looks like it could be a lot of fun. Castaway simulator? Count me in!

I don’t really know much about the upcoming Starlink: Battle for Atlas game other than that it looks really pretty and has some neat real-world toys to go along with it. I’m hoping for something that stokes the Lylat Wars fire deep within me, and the gameplay footage of deep space dogfights, planet exploration and ship customisation all look promising.

SoulCalibur III is without a doubt, my favourite fighting game of all time. The last few instalments in the series have been a bit average but SoulCalibur VI looks poised to set things right again. The highly technical, weapon-based fighter isn’t for everyone, but once you find your groove with a particular character and play style, you can find yourself in a flow state, gracefully balancing devastating attacks and solid defences. Plus, it has Geralt!

All you need to know about my feelings for Red Dead Redemption 2 is that I’ve traded my jorts for (arseless) chaps and started exercising my trigger finger. It’s quite possibly the most anticipated game of the year and it already looks like it was worth the wait. You’d better marathon Westworld from now until then partner, because you won’t be leaving the frontier for quite some time.

Finally, I’m a sucker for a good spooky game so I’ll no doubt be tentacles deep into Call of Cthulhu for Halloween. I haven’t played the tabletop game it’s based on, but I do love psychological horror and any game that plays with your sanity is all right in my book. The last game that scared me was the first person Resident Evil 7, so I have high hopes that this can follow suit and scare the willies out of me.

October is shaping up to be just as busy as September was, and I can’t really complain. Kicking off the month is Mega Man 11, the much-anticipated return of the classic Mega Man series. I only became a Mega Man aficionado recently after playing through the two legacy collections, but I can’t wait to see what a 2018 Mega Man looks and plays like. Next up is Super Mario Party, a game I’m going to make good use of at home to get the family playing the mighty Nintendo Switch. Mario Party has had a rough time of it recently, so I hope the addition of ‘Super’ in the title is indicative of a return to form.

Luigi’s Mansion is back, albeit on the 3DS (that thing is still alive?), but not even the ancient hardware can stop me from revisiting what was a Gamecube classic. I was only 4 years old when I played through it on Gamecube, and I’ll be just shy of 22 when I take it to the cleaners on the 3DS. Boy oh boy does time fly. Despite arguably being more keen to play Luigi’s Mansion again, Red Dead Redemption 2 is sure to occupy at least a little bit of my time. My experience with the first wasn’t as long as it probably should have been, but I’m still keen to see what RDR2 has to offer.

Lastly, I’ve heard numerous times about this first-person horror game called Bendy and the Ink Machine since it debuted on PC in 2017, and thankfully for me, it’s coming out on the Switch at the end of the month. The classic cartoon artstyle draws my attention as much as Cuphead did, and I’m intrigued to see just what all the hype about this game was for.

It’s been a couple months since I’ve had to pull out the jorts, with my denim delights collecting dust like the majority of my video game purchases. Alas, the time is nigh to dust them off and ride off into the mists of the holiday period. While I’ll be spending the first half of the month catching rays and smashing cheap Bintangs in Bali (wearing jorts, thongs and a Bintang singlet), there’s still plenty to get excited about. If you’ve followed this site since its genesis then you’ll know I’m a big Assassin’s Creed fan (and if you haven’t, well now you know), so it goes without saying that Assassin’s Creed Odyssey has got my Greek-inspired jorts in quite a kerfuffle. Stranded Deep is another title that ticks my boxes and hopefully it gets its console release after publisher Telltale Games threw the towel in last week. World War 3 is another title that I am keen to check out, more so because it’s developed by The Farm 51, developers of one of my favourite games this gen in Get Even. But taking the cake is Call of Cthulhu – my most anticipated title of the year. It has all the hallmarks of a Zach Jackson classic; set in the 1920s, investigation-based psychological horror, inspired by HP Lovecraft and a AA budget, so you know it’s going to be good.