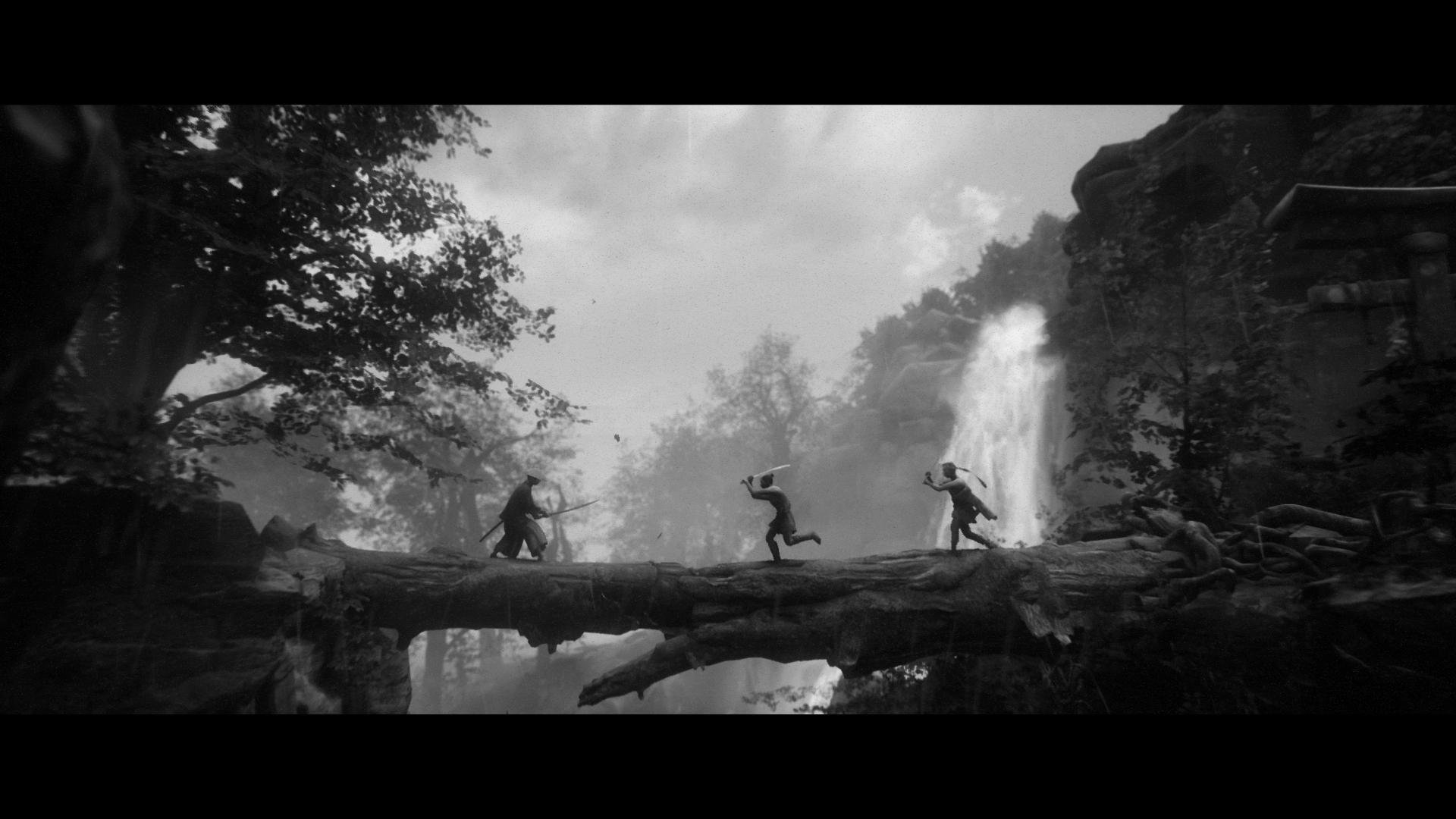 When the credits rolled on Ghost of Tsushima, I wasn’t ready to move on from feudal Japan and the stories of a lone samurai, I wanted more. The honourable violence and precise movements associated with samurai duels convert so well into the gaming medium, making it a setting that I’ll never tire of. Though similar in setting to Tsushima, Flying Wild Hog’s 2D upcoming title Trek to Yomi is vastly different in execution, featuring 2D combat and a striking monochromatic visual style that sets itself apart.

Thanks to publisher Devolver Digital, I was recently able to play through the first two chapters of Trek to Yomi and I’ve come away very eager to pick up my katana and continue on my path of vengeance.

In the opening moments of the game, we’re introduced to our young protagonist Hiroki as he trains with his master in the ways of the samurai, albeit with wooden swords for the moment. Acting as the tutorial, this lesson gives you the basics of combat. Blocking, parrying, light and heavy attacks and a switch stance to change your orientation are all that you’ll need for these early stages, with a few more abilities making themselves known as you progress.

The lesson is cut short, however, as bandits crash through the village and begin to destroy your home, an act that calls your master away and into battle. Despite being instructed to stay put, the young and brash Hiroki follows closely behind to help defend the village.

Outside of combat, you’re given a 360-degree range of motion, allowing you to explore the area for hidden secrets and interact with NPCs that will offer advice, provide context or simply give you a collectible. The camera stays locked in place, so don’t expect a tight third-person viewpoint, but the freedom to explore gives you a better feel for your surroundings.

Your movement will be restricted to a 2D plane when encountering enemies though, so as soon as you move into a new area you know what to expect based on the movement. Combat is fairly straightforward, with one-on-one encounters with regular enemies being a very short affair. Your opponents will stay at a distance until they’re ready to strike, leaving you with two options; go on the offensive and leave yourself open or wait for them to attack and attempt to parry. Both are viable, but the window for parrying is pretty forgiving, so blocking at the right time is the simplest way to victory.

You can’t just go swinging your sword around like a madman though, as each strike will deplete your stamina bar. If this empties, you’ll be more or less defenceless, so you’ll need to strike with purpose rather than flail about like a kid with a toy lightsaber. As you progress, you’ll also gain access to Bo-Shuriken, ranged daggers that can be thrown to inflict damage and stagger your enemy. You only have access to a limited amount of these useful items and your stock is only replenished at shrines that save your game, so you’ll need to use them wisely.

Regular enemies will only take a few strikes to fell, but when surrounded things can get pretty dicey. Tying your orientation to a button press means that the direction you’re facing is an active choice, forcing you to pay close attention and change when needed, as you yourself can only withstand around five slashes of a sword. Armoured foes are also introduced early on, providing more of a challenge as they can absorb far more punishment. If you manage to stagger them though, you’re able to use a finisher that will slay them and reward you with a small amount of health.

With that said, the AI during my play session was a bit hit and miss, with some swordsmen doing little more than standing around and waiting for a katana to the chest. This is a preview though, so hopefully, that gets ironed out for release.

Visually, Yomi is an absolute stunner. The black and white colour palette pays homage to classic samurai cinema that continues to impress with the passing of each area and almost every enemy encounter feels epic thanks to the stunning vistas in the background. Fork lightning over rice paddy fields, falling trees crashing through buildings and other scripted set pieces are dotted throughout and they impress every time. When I say that I took a lot of screenshots while playing through this preview, I mean a lot.

The plot that I saw set up in my 40 minutes with the game was a fairly straightforward tale of revenge and redemption, but that isn’t meant as a negative, as it feels authentically like a Kurosawa film. The Japanese voice acting is also very solid, with Hiroki’s performance being a standout. The game’s marketing alludes to the narrative taking a turn into the supernatural as well, so I have hopes that the story will have a few twists and turns.

Closing out my time with this preview I was left wanting to play more of Trek to Yomi, which shows that it’s on the right path, even if that path is one of violent revenge. There are some technical troubles that hopefully won’t make it to the final build and I’m expecting that the combat will expand past its simple beginnings, but overall I’m very keen to see where Hiroki’s tales leads.