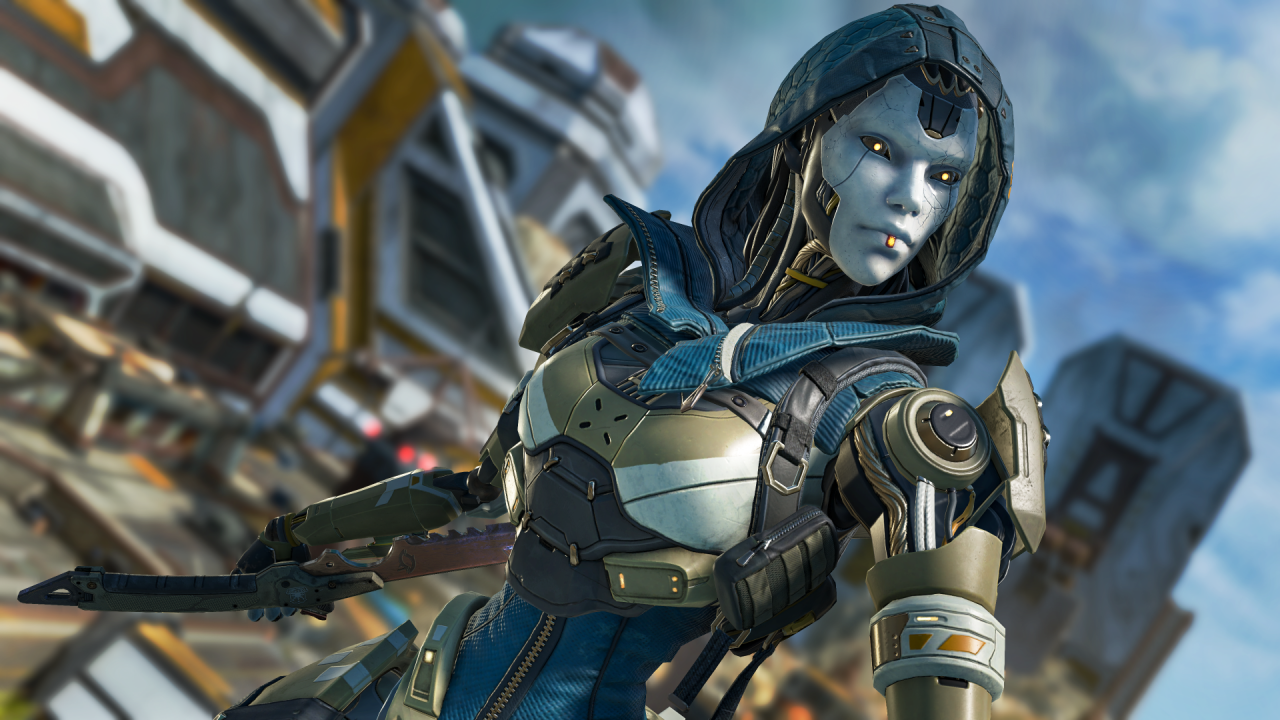 It was established from day one that Apex Legends was set in the same universe as Titanfall, but these last few seasons have been merging the two more and more. Sure, sure, Blisk has been a part of the games since its inception, but the introduction of Valkyrie, the daughter of Titanfall 2 villain Viper in Season 9 was arguably the biggest leap into the frontier.

Well, Valk can rest easy now, because an even bigger crossover character has stepped in to take the lead. Ash, the Simulacrum scumbag from Titanfall 2, is officially leaving her duties in the Arena and entering the Apex games in Season 11 – Escape.

Ash also brings with her a new weapon in the form of the C.A.R. SMG and a huge new tropical map named Stormpoint. After spending some hands-on time with the new content, I can tell you that Escape backs up the story excitement with heaps of gameplay variety, making this season a must-play for Apex fans.

For those hoping that Ash would be as brutal as she was in Titanfall 2, I’ve got some very good news.

To say that Ash is an offensive character would be an understatement. Adept at both finding a team and then swiftly killing them, this new Legend is going to cause me some grief. Firstly, let’s talk about Ash’s passive – Marked For Death. Death boxes are highlighted on Ash’s mini-map, allowing you to see where fights have been, which is handy in its own right, but that’s not all. Once you encounter a death box, you can give it a good old stab with a data knife, revealing the location of the team that stuffed the Legend into the box in the first place.

I had a great time with this ability. Scanning a death box and taking off in the direction of the killers is exhilarating and makes you feel like a real hunter. You won’t get a detailed analysis of where they are (so Bloodhound can rest easy), but it gives you enough info to head to the next fight.

Once you find the team, Ash’s Tactical and Ultimate will soon come into play. Her Tactical, the Arc Snare, is a projectile that deals a minor amount of damage and binds the unlucky Legend to a short tether. It’s slow moving in the air, but it can be doubled as a trap, as it stays live on a surface for a short time. Getting snagged by one of these is a pain, mainly because it limits your movement and sends you into panic mode, so it’s great for disrupting.

Ash’s Ultimate will make Wraith mains sweat. The Phase Breach has the Legend use her sword to cut a hole in reality and create a one-way portal in the distance. It isn’t as versatile as Wraith’s two-way portal, but this move absolutely kills in a fight. Other players can travel through the portal as well, but it doesn’t stay live for long. This is designed for quickly getting into a fight and disrupting a team, something that I had fun doing but had a rough time receiving.

I’m a Pathfinder main, so I’m more accustomed to throwing down ziplines than heavily pushing teams, but even I had a blast playing as Ash. She’s aggressive, mean and can throw a party of three well-kitted teammates into disarray in an instant. Do I think that she will need balancing once the season goes live? Yes. But do I think that she’s a Legend that adds a lot to the existing character pool? Absolutely.

Oh, I love a good SMG. Seeing as though I’ve got such awful aim, having something with a high fire rate is a must. But I also love the heft of an LMG, so what is a man to do? Just like the little girl in the taco ad, Respawn have decided to go with a “why not both?” approach.

The C.A.R. is yet another weapon to cross over from Titanfall. This versatile bullet hose blends together a light and heavy weapon in more ways than one. It has decently high rate of fire, while sporting recoil and damage more akin to a heavy weapon, making it reliable at mid-distance and a demon at close range.

Better still, the C.A.R. is able to accept both light and heavy ammo. That’s right, at the press of a button you can select between the two ammo types and load up this SMG with whatever you have in your backpack. I love the C.A.R.. Not only is it a dream to use, but it’s dual-ammo trick makes the early stages of a match far less stressful as far as looting is concerned. Having that extra option takes the pressure off a bit, leaving you more time to focus on other things (like not getting jumped by an Ash).

Tropical islands usually conjure thoughts of relaxation and drinking cocktails by the pool. Yep, well get that notion out of your head because while Stormpoint certain looks beautiful, it wants you dead.

This is the biggest Apex map to date and, but despite its sheer enormity, it’s also the densest. Flying over the map at the beginning of each match, I was never sure where I wanted to land. From sandy beaches and leafy jungle areas to multi-story installations and watchtowers, this map’s number of points of interest is staggering.

Better still, it’s not just a select few bigger areas connected by stretches of nothing, there are dozens upon dozens of smaller outposts that provide cover and make for excellent small-scale battlefields. In true vacation spirit, the Redeploy Balloons are taking a break to be replaced with Gravity Cannons. These things are fun as all hell, but dangerous. Shooting you high and fast in a single direction, you have full control over your weapons and abilities, meaning you’re never left defenceless.

I had one specific encounter during my playtime that completely sold me on this new addition. When our team rolled up on an enemy squad and started firing, the opposition used a Gravity Cannon to flee, only for us to pursue. Well, cannons are placed so that they face each other, so for the next few minutes, we battled it out in the air, launching back and forth between platforms until one team was left standing (flying?). I’m happy to report that we won.

The other major addition coming with Stormpoint are the enemy NPCs. Throughout the map you can encounter two kinds of enemies: Prowlers and Spiders. The Prowlers can largely be found near the edges of the map, prowling around their nests, protecting high level gear. These reptilian bastards will attack you if you come too close, but the loot they drop will likely tempt you into doing just that. Don’t worry, they’re not a constant threat, in fact you’ll need to seek them out in order to enrage them. It’s essentially another way of interacting with loot that will give away your position, but with an added layer of combat, so I’m on board.

The Spiders on the other hand, they’re awful. These creepy crawlers lay in wait, encased in egg sacks all over the map, waiting to freak me the hell out. Unlike the Prowlers, Spiders won’t attack players unless they’re provoked. They do offer loot once you dispatch them, but I found that they were more useful as a mid-fight distraction, or a trap used to kick off a battle.

Neither of these NPCs completely change the game, especially considering we’ve seen Prowlers in BR maps before, but they both have the potential to add strategy in the right circumstances.

With the inclusion of Ash, I know that Season 11 is going to be rough for me, especially once players more skilled than myself find creative ways of using her abilities, but that doesn’t make me want to jump in any less. More than anything else, my time with new content showed me just how varied this season is going to be, with each of my matches being vastly different to the last, and I had a great experience each and every time.