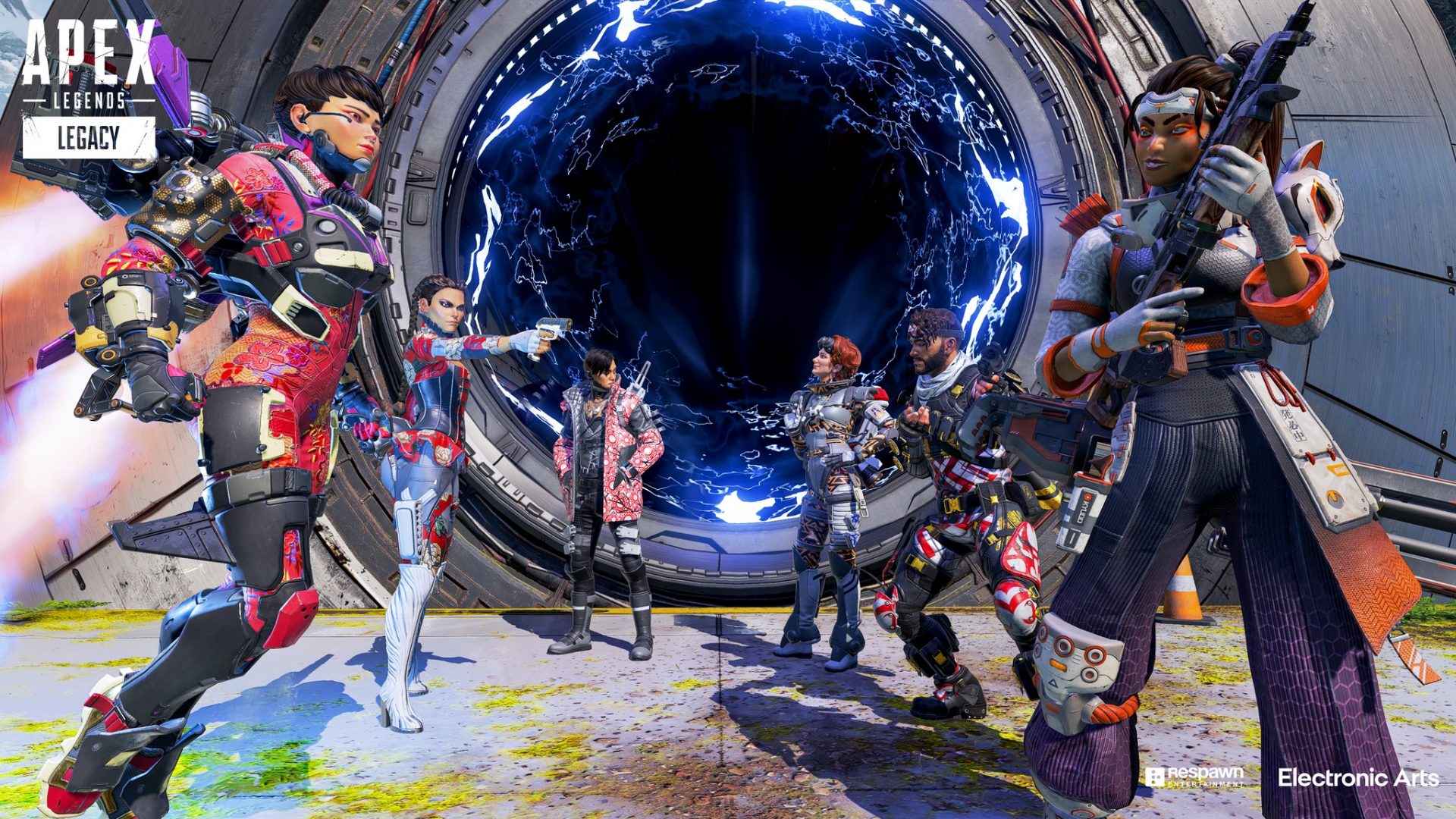 Each new season of Apex brings with it a new Legend, sporting a fresh set of abilities, and either a new or reworked map to shake up the status quo. Whether it’s King’s Canyon getting torn apart even further, Loba swiping loot from under other players’ noses, or Fuse quipping his Aussie way onto the battlefield, each new content drop introduces something new and exciting. Legacy is easily the game’s biggest update yet, set to not only introduce a new Legend, weapon and map but also a new permanent game mode in the form of Arenas.

Recently, I was fortunate enough to attend a digital event where I was able to go hands-on with all of the tasty new content from Season 9. Keep in mind that I was using a PC during this preview, far from my PS5 comfort zone, but this didn’t impede my natural abilities at all; I still sucked. In all seriousness though, after seeing what’s to come with Season 9 I can safely say that there’s a whole lot for Apex fans to get excited about.

Easily the biggest new addition to come from Season 9, Arenas is a brand-new permanent game mode that will join the classic battle royale staple that we all know and love. Arenas is a 3v3 mode that pits two full squads against each other in smaller, custom maps to fight it out for superiority. Each game is made up of numerous rounds, with a win being awarded to the team who can secure three wins with a two-round lead, meaning the game can end in three rounds or it can go as long as nine, with the final round being sudden death.

Arenas is fast, skill-based and experimental. Rounds never lasted for more than a few minutes and regardless if I was on the winning or losing side I was always keen to jump into the shop, adjust my gear and get back into the fight. Just like battle royale, rounds of Arenas will more often than not be won by the more prepared and more skilled team. Luckily, with rounds of Arenas lasting only a few minutes each, you’ll be getting plenty of first-hand experience just by playing the game. Whereas some games of the battle royale mode can consist of long stretches without combat, Arenas is more action-packed in its moment-to-moment gameplay due to the smaller map sizes, so you’ll no doubt be improving your gunplay just by taking part in matches.

The shop is where you’ll start each and it’s a great system that facilitates round progression and experimentation. In the first round or two, you’ll only have enough resources to purchase a basic weapon and a grenade, but as rounds progress you’re given better armour and you’ll have enough resources to afford better gear and abilities, making late-game altercations far more aggressive and varied. I do fear that certain Legends, like my boy Pathfinder, might be warming the bench a fair bit in this mode, but that’s not too problematic for a weapons-first mode like this.

The two tailored maps, Phase Runner and Party Crasher, are a really good size, with purposeful layouts that allow you to spot the enemy team from a distance without being so open that you get lasered by a sniper rifle at the beginning of every match. Both maps have two points of interest each, such as Mirage’s Voyage and a Phase Runner (who would have guessed) which tend to be the stage for most encounters.

The tailored maps are blast to play on

Being the biggest narrative link to Titanfall that Apex has ever seen, Valkyrie will undoubtedly have fans based solely on her back story, but when it comes to her in-game acumen is she any good? The short answer is yes.

Valk is a recon class, meaning she’s adept at scouting out enemy teams and getting a lay of the land, but she has a particular offensive edge to her. Her most obvious advantage is her passive, the VTOL Jets (AKA her jetpack). With a double-tap of jump Valk can gain altitude and move around the air freely but at the cost of being able to use her weapons. Hovering, gliding and climbing with the VTOL ability is slightly slower than I assumed it would be, but in the grand scheme of things that’s a positive. When playing as her I found the VTOL to be a useful tool to scout the battlefield and pursue opponents, but it did make me vulnerable to enemy fire with few ways of countering other than dropping back down to the ground.

Luckily, her tactical packs a punch that can and should be used while in the air. Missile Swarm does exactly what it says on the tin in unleashing a volley of rockets in a small grid pattern. Though they don’t have a huge damage output, the missiles are great for slowing down your opponent as they inflict an amount of stun, or pushing them into cover or away from your position. I had the most fun using this tactical when I used it at the top of an encounter, catching the enemy by surprise and scattering them before they know what was happening.

Valkyrie is a useful but fairly balanced Legend

Further solidifying her as a recon Legend, Valkyrie’s ultimate, Skyward Dive, allows her and her teammates (optionally) to launch into the air and skydive back down to the surface, essentially redeploying onto the battlefield. While I didn’t find great a use for this in Arenas, it did show its worth in battle royale. Having the option to escape a potentially deadly encounter or close space while the Ring is shrinking is a massively advantageous ability to have up your sleeve. I had at least one instance during my playtime where Valk’s ultimate meant living to fight another battle, so it has my tick of approval.

All things combined, Valk feels like a formidable new addition with some drawbacks that keep her from feeling too overpowered. The fact that Respawn has managed to add in a Legend that uses a jetpack while keeping them well-balanced is impressive to say the least.

Oh boy, this will be my worst nightmare once it’s out in the wild. Incredibly accurate, the Bocek Bow is a precision weapon that deals some hefty damage when fully drawn back. Dangerously, the drawback time is pretty damn fast, meaning if you’re accurate enough you can down an enemy with blue or purple armour in just a few body shots. Don’t get me wrong, while I was using it I was having a hell of a good time, but being on the receiving end didn’t feel so amazing. All in all, like any new weapon that gets added to the loot pool, it’ll need some balancing.

Seeing as though it’s the only weapon that uses arrows, the Bocek Bow has its own ammo type that’s very scarce in battle royale, meaning that I and other players were a little more hesitant to loose them at the drop of a hat. Thankfully the bow is a mid-range weapon, so I wasn’t being stuck from the distant horizon, but when in range I was a pin cushion.

My main fear is that the bow will be a right pain in the arse when playing Arenas. With plentiful amounts of ammo and a closer style of combat, I can see it quickly dominating and becoming a real pain point. Overall I enjoy the Bocek, but I see some potential aggravation coming from it.

This bow will be the death of me

Lastly, we have this season’s map update, this time focusing on Olympus. Overgrown with nasty vines, Olympus feels a little less open and exposed than it once did. Two redeploy balloons have been removed and a huge ship has been docked at the edge of the map. Named the Icarus, this ship provides Olympus with a much-needed point of interest on the border of the map, something that it’s been lacking since its Season 7 introduction. This update doesn’t make any massively altering changes, but I enjoyed exploring the Icarus and fighting other teams to be the first to unlock the bridge where all of the top-tier loot was hiding.

Season 9 feels like a major shift for Apex, a shift that I didn’t know how much I wanted until now. Arenas feels like a natural fit and will no doubt result in Apex being a much more well-balanced game, and Valkyrie makes for one hell of a new recon Legend. My hands-on time has me feeling nervous about the Bocek Bow, but only time will tell with that one. All in all, I’m really pleased with what I had the chance to play and I can’t wait for Season 9 to go live on May 4.