As if 2020 didn’t have enough ‘interesting’ and ‘world ending’ stuff going on, apparently the digital landscape needs a good scare for it’s denizens.

Apple has actually removed Fortnite from the iOS App Store. Why? because apparently Epic Games has violated its guidelines. 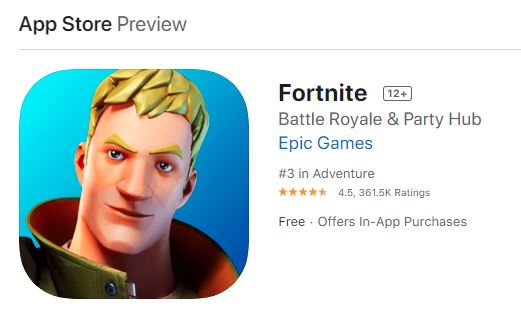 Have you seen this App? Last seen a few days ago

For those that don’t know, all in-app transactions end up paying paying Apple a 30 percent fee – This is similar on the Google Play Store. It seems that to get around this. Epic Games added a new in-game payment system that entirely circumvents that nasty marketplace fee. Interestingly enough, they even lowered the price on their v-bucks bundles – basically pushing the savings on to their consumers.

Now, Apple has made it clear in the past that these rules are in place as a way to keep its store safe for its users – and as a response to what Epic has done, they have offered a statement to The Verge claiming Epic did this “with the express intent of violating the App Store guidelines regarding in-app payments that apply to every developer who sells digital goods or services.”

It’s a sticky situation, and it does make me wonder – will Google follow suit? Surely they have similar policies?

Update: The Verge: Fortnite is currently unavailable on Google Play.

So, Fortnite is now missing from both major players in the mobile gaming sphere. However, Epic actually offers an alternative (somewhat shaky) method for installing on Android devices, so the Android dudes out there are still able to get their Victory Royales.

Epic seems to have a very careful set of responses to deal with this situation, going so far as to suggest that the issue is a matter of antitrust:

Yeah, I had to double check the definition to make sure I fully understood it – and arguably the ‘closed platform’ nature of the iOS device family doesn’t do much to dissuade people that it is, indeed, a monopoly.

So at this point, the focus may be shifting away from HOW CAN I PLAY FORTNITE RIGHT NOW, and possibly a little more ‘Is Apple a bit tyrannical.’

It will be interesting to watch it unravel – in the meantime, here is a piece of Fortnite marketing that sends a very pointed message: #freefortnite

Even Tetris Has A Free Battle Royale Game And It’s Out Today
February 14, 2019

Why Heroes Of The Storm Demands Your Attention
June 25, 2018

Starfield Will Be A Microsoft Exclusive According To Xbox Insider

Sneaking its way onto PS5

Godfall Is Significantly More Expensive On PS5 Than PC

Epic price on the PS5

Black Ops Cold War Is Better Than Modern Warfare In Every Way That Counts, Change My Mind

Was the 'box doxxed?

Microsoft Purchases Bethesda And Its Studios For US$7.5 Billion

Mr Stark has been busy

A choice that we really don't get