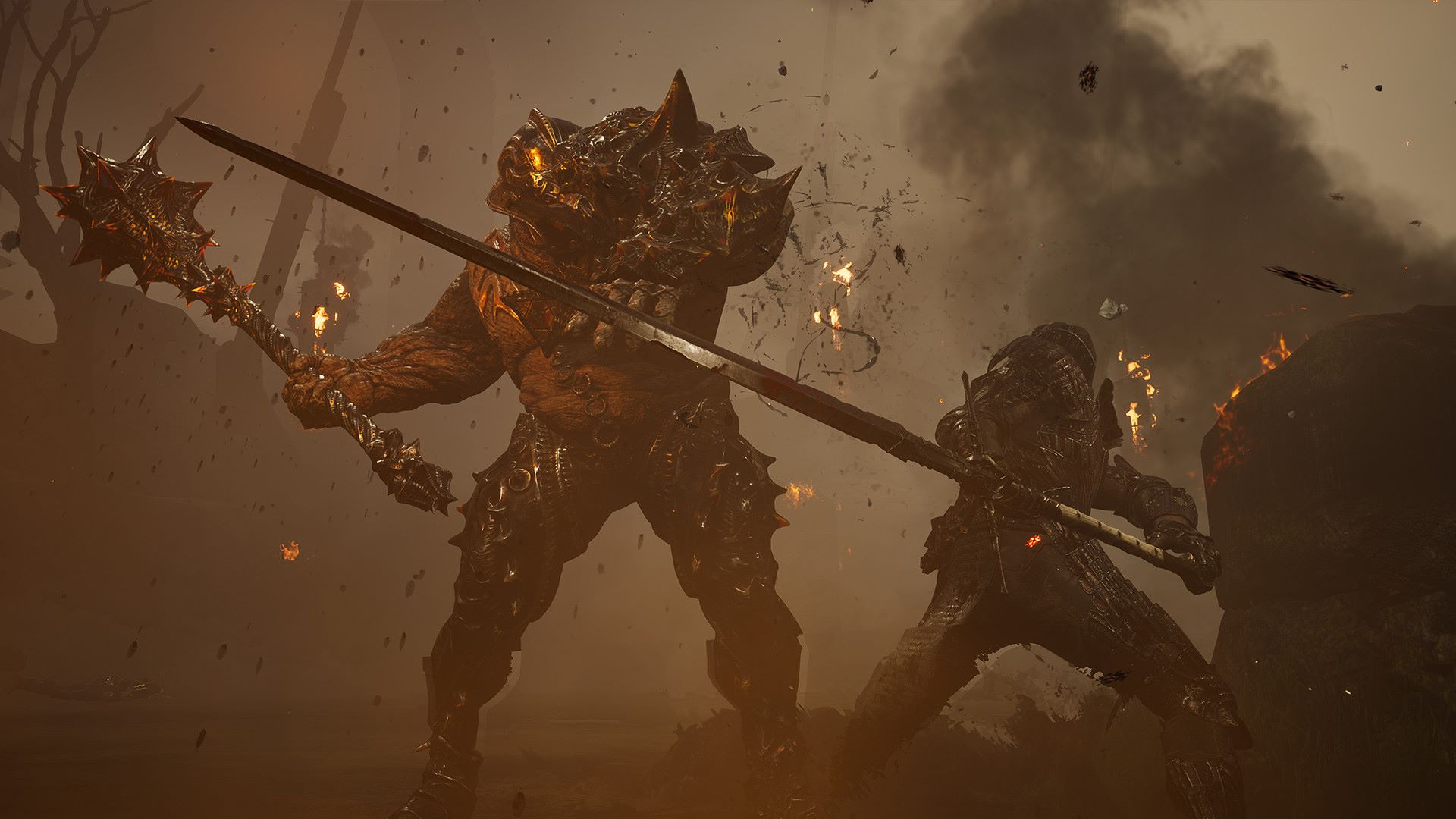 It’s not easy knocking on the door of the house that Dark Souls built. They say imitation is the sincerest form of flattery, if that is the case then the Soulsbourne games must be drowning in pools of fan mail. Several games have borrowed liberally from the Soulsborne legacy, but franchises like The Surge and Nioh have proved you can pay homage to the greats but still have a…soul…of your own. While endless comparisons of hardcore hack and slash titles to FromSoft’s masterpieces are becoming more than a little tiresome, the fact that Mortal Shell looks so similar to the series that birthed the genre invites those comparisons willingly. Thankfully, while Mortal Shell plays like a love letter to the original Souls games, it’s got enough heart and substance of its own to distinguish itself as its own entity. A feat made all the more impressive by the fact it is the work of a comparatively small studio.

Yes, this bag of flesh will do quite nicely

Mortal Shell’s world is a grim and depressing affair that you are unceremoniously thrust into without much context or guidance. You are essentially a weak soul with nought but a sword and a dream of survival in this harsh world, and it’s up to you to figure out what the hell is going on. The story is told in obscure drips and drabs via inscriptions you find about the place, as well as through the cryptic musings of NPCs. I’d be lying if I said I fully grasped the story (just as I didn’t in any of the Soulsbourne games), and at the end of the day it feels more like a vibe than a concrete thing, but the game importantly nails the sense of atmosphere and dread that is so core to these experiences. Even if I didn’t have a clue what was actually happening, I was always compelled to delve deeper into the mysteries of Fallgrim, immersing myself in its exquisite decay.

Gameplay-wise it’s the hardcore hack and slash genre as you’ve always known and loved it; you have a limited pool of health and stamina, your attacks are slow and deliberate, button mashing is punished and enemies hit like trucks. But Mortal Shell features some very unique and inspired core mechanics that are key to it establishing its identity. Firstly, there are the titular Shells, which are essentially fleshy suits of armour that you must track down and inhabit. As a wandering soul you are very weak when not inhabiting a Shell, and you’ll easily go down in a single hit if you’re caught outside their warm embrace. Shells (of which there are four) all offer unique base stats and abilities, as well as a story that goes along with how they ended being the vessel through which you may navigate Fallgrim. Unlike typical RPGs, you can’t actually level up in any real sense; the health and stamina pools of a Shell are the more or less the same in the first hour as they are in the twentieth. You’re encouraged to find one that suits your playstyle, and using the game’s currencies of Tar and Glimpses you can purchase unique abilities for them that even up the fight a bit. The Shells all have awesome, distinctive visual designs, and feel very different from one another. I kind of wish there were more than four, but that’s more me being greedy than any failing of the game itself.

Playing into this Shell mechanic, if your health is reduced to zero while piloting one of these flesh puppets, you’ll be forcibly extracted from it and revert back to your much weaker form. You have a single opportunity to reclaim your Shell per life, and if you go down a second time it’s back to the last Sester you visited (doll-like creatures that you can awaken that act as the game’s bonfires). As is typical of these sorts of games you’ll be able to track back to where you died and reclaim your Tar, which is good, because at the start of the game you are going to be dying a lot (more on this later).

Even as someone who is very familiar with the hardcore hack and slash genre, I was immediately humbled by the game’s steep learning curve. My first few hours were spent in frustration as the game unrepentantly crushed my spirit at every turn

The other unique mechanic is the complete absence of a block button. Instead you have an ability to harden (permission to giggle granted), which turns your skin (or whatever it is you have stretched across the tired bones of your corporeal form) to stone and makes you impervious to even the hardest strike. Being struck while hardened will break the form and usually stun the enemy, and although it may seem like an easy get out of jail free card, it’s on a well-proportioned cooldown so don’t expect to be spamming it constantly. It’s a cool mechanic and you can harden at absolutely any time (including mid-weapon swing or dodge roll), and mastering its use is essential to surviving Fallgrim. It does end up being a little of a double-edged sword though, as the inability to block means staying in the heat of battle swinging away is basically suicide. It means it’s much easier to wait for your harden to recharge, get in a couple of hits and then retreat and repeat. It takes a little while to find your rhythm, but once you do it becomes a little too easy to exploit the fairly ordinary enemy AI.

I say this of course with the benefit of having played the game for fifteen hours, as my first baby steps in Mortal Shell were incredibly embarrassing. Even as someone who is very familiar with the hardcore hack and slash genre, I was immediately humbled by the game’s steep learning curve. My first few hours were spent in frustration as the game unrepentantly crushed my spirit at every turn; I didn’t know what I was doing, and then when I did know what I was doing I didn’t know how to do it without being steamrolled. But Mortal Shell rewards perseverance and patience like any good game of its ilk, and despite early frustrations the game is balanced and fair if you are able to rise to its challenge.

One mechanic I was less enamoured with was the parry, which is powered by a separate resource called Resolve (gained by doing damage to enemies or using specific items). With enough Resolve you can parry most enemy attacks and then leave them open for a powerful riposte that can do things like set them on fire or regenerate your health. When you pull it off it’s awesome, but the timing of the parry is extremely odd, making it prohibitively risky. Eventually you get better at it, but the timing never feels good, and I generally avoided using it against the more powerful enemies where the rewards were far outweighed by the risk.

Just a man and his hurty stick

Mortal Shell rewards perseverance and patience like any good game of its ilk, and despite early frustrations the game is balanced and fair if you are able to rise to its challenge

It bears mentioning that Mortal Shell is quite a beautiful game to look at, with the developers proving deft hands at getting a lot out of Unreal Engine 4. The texture work and lighting is fantastic and help sell Fallgrim’s grim aesthetic and atmosphere, and the character designs are also quite creative. The level design is similarly well executed, and although I spent the first few hours fairly lost in the labyrinthine world of Fallgrim, patient exploration revealed it to be much smaller than it first appeared. But while the interconnected world of Fallgrim may be much smaller than your average Lordran or Ashina, it lends itself to a tight and focused experience, and every corner is packed with interesting things to see and kill.

Performance-wise, the game does have a bit of jank about it. This is felt most keenly in the way that combat can feel a little on the clunky and unresponsive side, but even that has its own charm to the point that I wonder whether it was a deliberate design choice. Animations and hitboxes can also be a bit spotty, but this was all fairly easy to overlook in the grand scheme of things. I did encounter an odd bug that completely disabled my ability to harden (like having a few too many shandies on a Friday night), requiring me to reboot the game to fix it. This happened to me a handful of times while I was scrambling around, and didn’t appear to be a mechanic in the game. Losing your core defensive ability isn’t exactly the most fun you can have when you’re surrounded by creatures that want you dead and you’re far from a checkpoint.

Mortal Shell is a triumph of clever and novel design in a genre that always sees a new title compared to the best of the best. Its steep difficulty, unique mechanics and treacherous world begging to be explored and mastered make it a compelling package, and its positives combine with more than enough flair to make you forgive a few technical and design issues. As a debut outing, Mortal Shell puts developer Cold Symmetry on the map, and I’ll be certainly interested to see what this talented studio turns their hand to next.

Reviewed on Xbox One X // Review code supplied by publisher 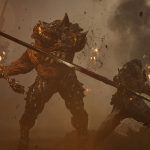 Mortal Shell Review
Mortal In A Half Shell
Cold Symmetry has created a focused experience that oozes style and confidence in a genre that's tough to distinguish oneself in
The Good
The titular Mortal Shells are awesome
The harden mechanic is unique
Fallgrim is beautiful, unforgiving, and a pleasure to explore
The Bad
Harden-disabling bug annoyances
Combat once mastered exposes slightly weak enemy AI
Parry timing feels off
8.5
Get Around It

Mortal Shell Review
Mortal In A Half Shell
Cold Symmetry has created a focused experience that oozes style and confidence in a genre that's tough to distinguish oneself in
The Good
The titular Mortal Shells are awesome
The harden mechanic is unique
Fallgrim is beautiful, unforgiving, and a pleasure to explore
The Bad
Harden-disabling bug annoyances
Combat once mastered exposes slightly weak enemy AI
Parry timing feels off
8.5
Get Around It
In this article:AA jank,Cold Symmetry,dar souls,fallgrim,hardcore hack slash,mortal shell,playstack,sekiro