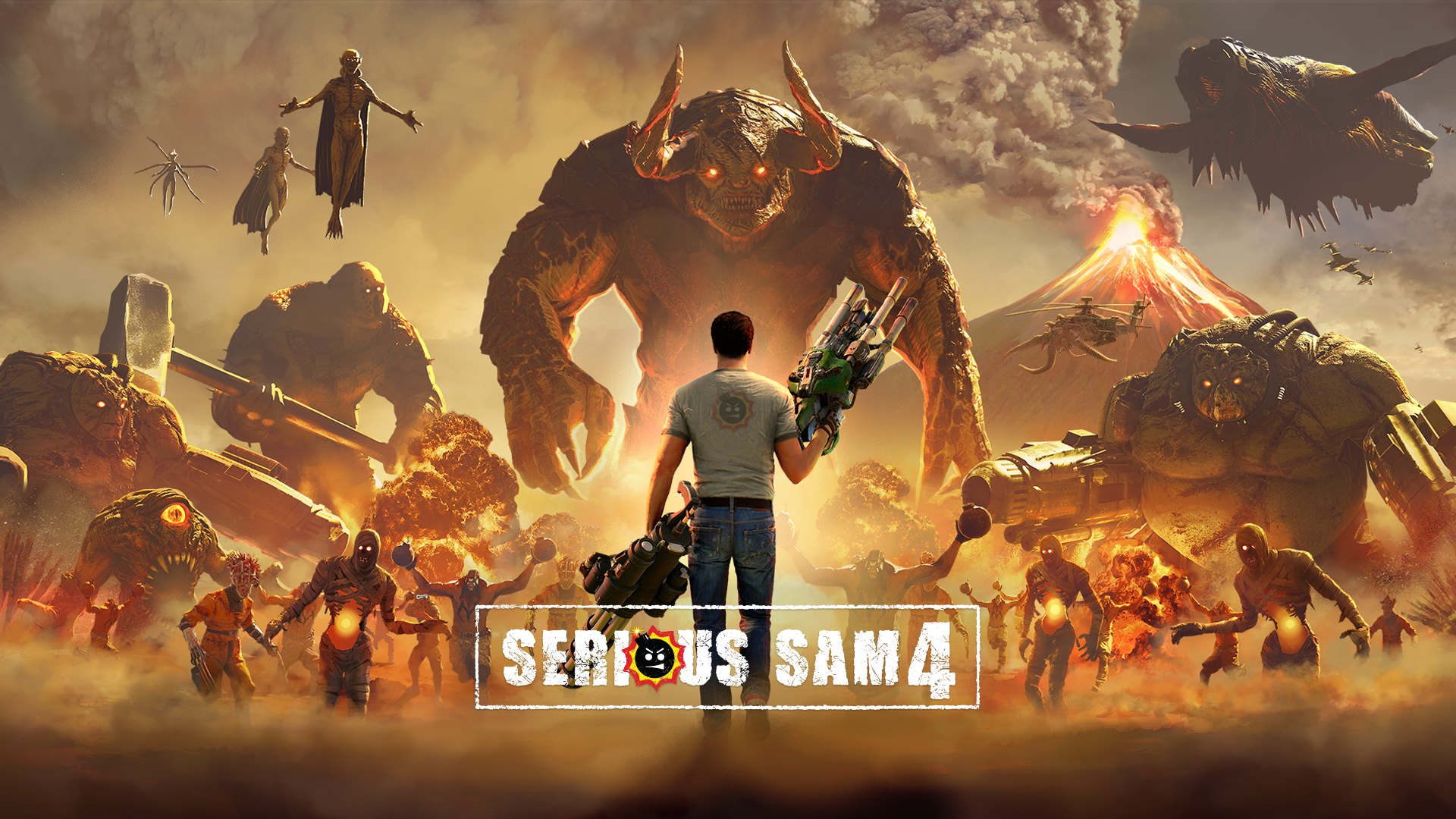 Serious Sam 4 is a sequel. In a big, proper way – we all know it can be a bit of a crapshoot when a game you like changes the number in its title.

Some sequels are happy to follow the ‘iterative’ pathway, where the game you get is effectively the previous game – just bigger and better than before, perhaps with a smattering of improvements to oft-disliked functionality. Others can err closer to being re-imaginings, where the developers wholesale change the formula in scary, scary ways – I am looking at you, Dead Rising 4.

Serious Sam 4 is absolutely in the previous camp. As a tired 30-year old, I was not expecting to play a game that put me back in the shoes of my 2001 self, gleefully blasting skeletal horses and running from the headless, screaming hordes. I intuitively felt my atrophied, twitch-shooter muscles re-awaken within moments of hearing Sam’s gravelly voice, and I embarked on a goofy mission to the Vatican library, rookie in tow. I was a 90s action game hero once more, one-liners rapid firing as quickly as my double-barrel shotty could reload. Dollar-store Duke Nukem or not, I am a fan of Sam.

Things are heating up

It’s almost tragic how the game’s formula can become readily apparent during your journey through its campaign. It’s an odd satisfaction you feel as you come to grips with the fact that you can clearly feel out how waves of enemies will come at you – the action FPS tropes of yesteryear are broadly on display, and even though you are coldly calculating exactly where to place your next rocket to demolish as many kamikaze soldiers as possible, you can’t help but question exactly where this feeling of enjoyment is coming from. To me, it was a feeling of catharsis that had long been suppressed – I was both enjoying the activity of wiping out aliens, but also questioning what made it satisfying.

And while the game feels aggressively 90s inspired, everything that needed to be modernised has been given the appropriate amount of polish. A weapon wheel helps you navigate the plethora of boomsticks, a simplistic skill point system allows you to make Sam your own and a super populated in-game help option ensures you are never confused or stuck on an objective or enemy attack pattern. All of these quality of life features feel right at home, without compromising the essential Serious experience.

Aged care is really ramping up the daytime activities

I ended up feeling so immersed in my retro shooting experience, that I felt my critical eye start to waver when looking at the visuals of the game. Truthfully, the game has some genuinely awe-inspiring things to look at – teeming hordes of enemies, colossal set pieces and bosses – it can be a real feast to behold. However, janky character animations during cutscenes and downright mediocre environment details are hard to ignore or forgive – and suddenly you realise that you are playing a game released in 2020.

You quickly realise the story serves little purpose than to change scenery and throw new enemy types towards you, but the real strength comes from a surprising amount of heart that has been tacked onto your gameplay experience. As Sam encounters the denizens he shares his world with, many have their own little tale to tell – and these stories are told with a quick shot of human spirit. Encountering an Italian freedom fighter that is mourning the loss of his friend, a hero to the Italian people, Sam explains to him that what his friend represented is not dead. Instead, it is up to him now – to keep the legend alive. What I expected to be a doofy side-quest romp for the sake of a new gun, turned into a moment that actually had some weight to it. Oh and I did get a new gun too, so double bonus.

Your gun-tastic voyage is diverted at times – the game provides opportunities to jump onto giant enemies, ride in a colossal pope-mobile battlemech and even trawl across verdant fields of grass in a combine harvester. And yes, of course you do this while mulching up enemies. All of these moments seem well placed to make sure that the player feels some kill-variety at just the right moment.

What I expected to be a doofy side-quest romp for the sake of a new gun, turned into a moment that actually had some weight to it

Really my biggest criticism is directed towards the level design. I was willing to forgive the gauntlet style romp through monster rooms, with conspicuously locked doors remaining closed until your foes had eaten a buffet of buckshot – it is in the game’s nature to ensure you play n’ slay after all – but I was not prepared for the baffling placement of walls and doodads. So much of the game involves you traversing ruins and catacombs, that you’d expect all manner of walls and dead ends. However Sam 4 just has some of the whackiest layouts I have ever seen – and it absolutely is not for comedic effect.

I would find myself leaping off whatever chest high surface I could find in an effort to clear some space between the hordes and my missiles launcher – only to discover a doorless room lay on the other side. In some cases, I would become entirely stuck in this mysterious void-room …sometimes I would manage to free myself by way of a tactical self-explosion or enemy area-of-effect attack. There were even a few moments where I would discover that an enemy had actually spawned in one of these voids and was now doomed to scream forever at the walls of his unintentional prison. I was at least relieved in these portions to find that void-stricken enemies would never result in a locked door remaining locked at least – which begs the question, were CroTeam aware of this issue and accounted for it?

By Serious Sam Standards, this is a SMALL number of enemies

There are other bugs that become apparent – guns with no muzzle flash, a few enemies that seemed to become braindead out of nowhere, there is even a spot of weird music repetition in a particular level where I found myself wondering if the song playing only had a minute or two of audio before it restarted. All stuff that could be (and may well already be) fixed in a day one patch.

Beyond this, the actual journey throughout the levels would start to feel overtly lengthy at times. Moments would crop up where I would openly ask myself ‘How much longer is this level?’ – finally hitting the limit of my interest with the segment – right before the game would throw a small cutscene or boss battle at me. It was a roller coaster of up and down on the frustration scale where I perhaps wonder if some small cuts would deliver a more comprehensive shooter experience.

This reminds me of my Carrion review

It’s a puzzling title to judge. On one hand, Serious Sam 4 has displayed a very slavish dedication to the ideal of ‘If it aint broke, don’t fix it’ – but at the same time, an entirely new generation of gamers now exist that may not want to buy what it is selling. I can’t help but feel it will be polarising to a lot of people, simply by virtue of its obvious identity as a 10-hour retro-shooter game at a time when retro shooters don’t command a lot of market share.

To me though? Serious Sam 4 is a dinosaur with fancy new clothes. And dinosaurs are fuckin’ rad. 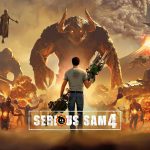 Serious Sam 4 Review
I Lost My Shoe
Though flawed, this blast from the past manages to scratch an itch that is over a decade old
The Good
Retro 90’s shooter fun, amped up to 11
A strangely heart-warming look at the human spirit
Some beautiful visuals
Good god THE GUN VARIETY
The one-liners are genuinely great
The Bad
The retro feeling can lean dangerously close to dated
The supporting cast is a little too cardboard
Some ponderously not-great visuals
Character animations are straight out of the 90’s
Some segments outstay their welcome
7
Good

Serious Sam 4 Review
I Lost My Shoe
Though flawed, this blast from the past manages to scratch an itch that is over a decade old
The Good
Retro 90’s shooter fun, amped up to 11
A strangely heart-warming look at the human spirit
Some beautiful visuals
Good god THE GUN VARIETY
The one-liners are genuinely great
The Bad
The retro feeling can lean dangerously close to dated
The supporting cast is a little too cardboard
Some ponderously not-great visuals
Character animations are straight out of the 90’s
Some segments outstay their welcome
7
Good
In this article:Croteam, devolver digital, Serious Sam, Serious Sam 4