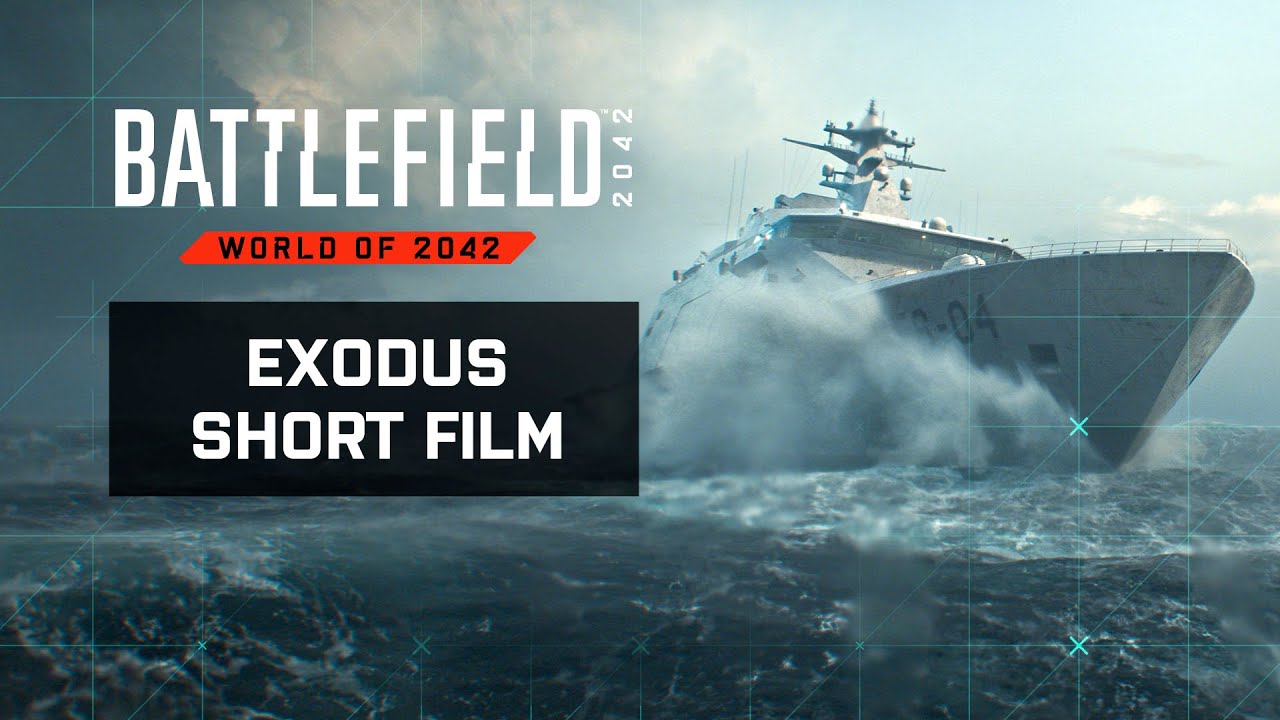 EA and DICE have just released a Battlefield 2042 short film titled Exodus that introduces us to the plot of the upcoming game. Seeing as though 2042 is a multiplayer-online affair, it might have been safe to assume that narrative was going to take a back seat, but this short film tells us otherwise.

The world is in a rough state in 2042. Rising global temperatures and sea levels are causing devastating disasters, economies around the globe are failing and food shortages lead to spiking death tolls and violence. Those who become displaced from the worsening state of the world group together without a nation and are given the title of Non-Patriated, the No-Pats.

As the world heals following the years of decline, tensions begin to boil between the US and Russia, with the No-Pats caught in between. That’s where this short film picks up, with the Captain of The Exodus, a No-Pat warship, sent on a mission to retrieve intel for the mysterious Oz, a puppetmaster who looks to unite the No-Pats under one banner, no matter the cost.

Moments into the short film it’s revealed that we know this Captian, it’s none other than Kimble ‘Irish’ Graves, a former member of the Tombstone Squad whom we last saw in Battlefield 4. Irish retrieves the intel, but not after a firefight with his former compatriot Bukowski, who sees our man Graves as a traitor.

Once back on board the Exodus, Irish discovers that he has got his hands on coordinates to experimental weaponry that the mysterious Oz wants to use, potentially starting a war. A fight breaks out between Irish’s men and Oz’s, who have come to collect the package. Bokowski makes the ultimate save, as one of Oz’s men was using Irish’s son as a bargaining tool, sacrificing himself in the process. Exodus ends with Irish putting a call out to all No-Pats, asking them to band together and fight against the radicalised Oz.

Phew, what a tense few minutes. This is one hell of a way to get the narrative ball rolling and I’m keen to see where things go from here. It was explained in a Q&A following the reveal of Exodus that 2042’s story will be told both in-game and in other mediums, though we don’t know exactly what that entails quite yet. What I do know is that this story of global conflict has me intrigued.

Want to know more about Battlefield 2042? We’ve got you covered. You can find our coverage on the game’s new Portal Mode, our interview with Ripple Effect’s Rob Donovan, our look at the All-Out Warfare experience and more right HERE.

Did you enjoy Exodus? What do you think about implementing story into multiplayer games? Let us know in the comments or on our social media.