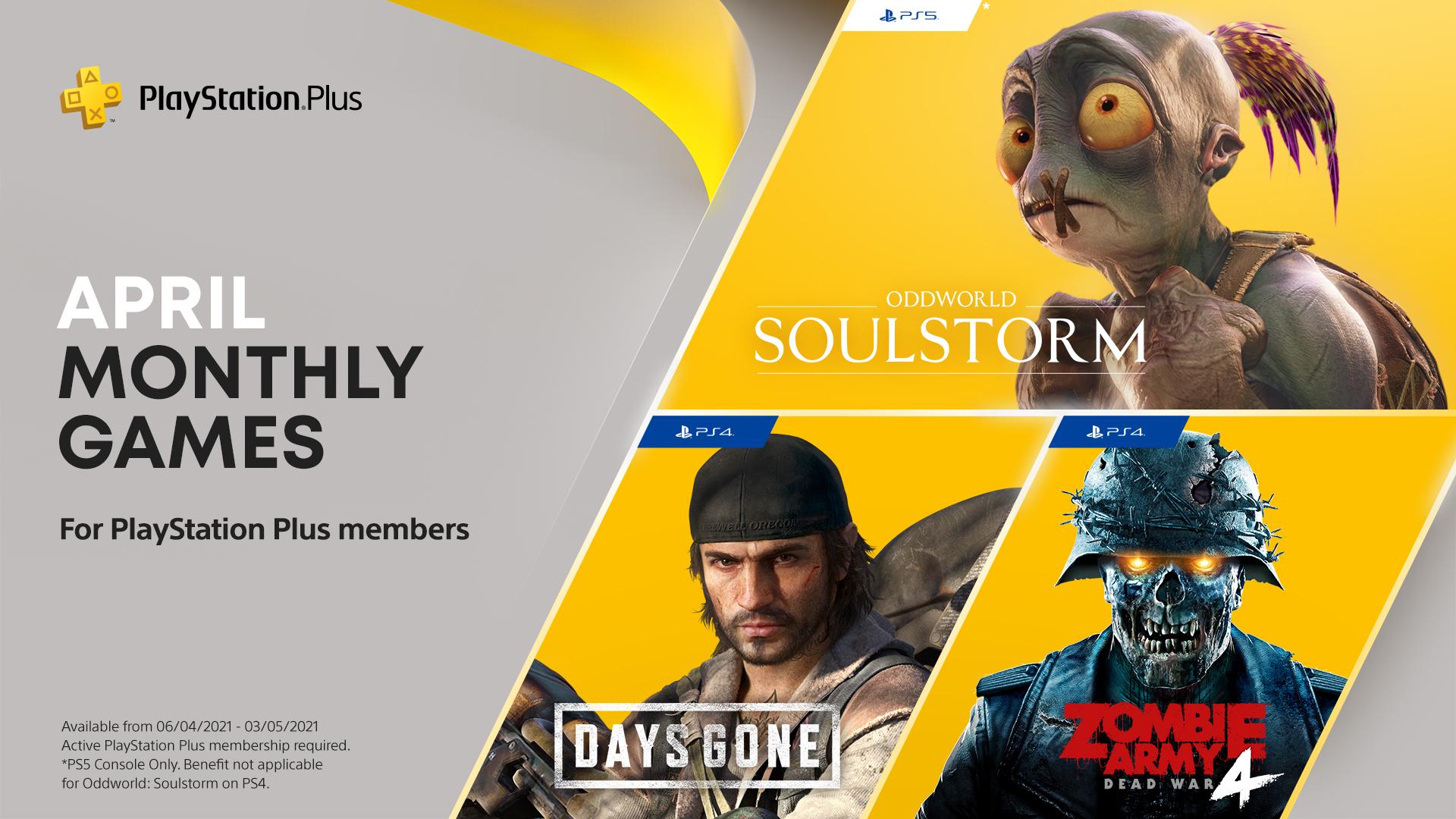 Hello April 1st, please be nice and don’t fool me into thinking that cool things are happening when really they’re not. One piece of news that’s as rock-solid as chocolate straight out of the fridge (disgusting by the way), is the announcement of April’s PlayStation Plus games. March was a cracker of a month, giving us Final Fantasy VII Remake, Maquette, Farpoint and Remnant: From the Ashes, but it’s time to look ahead towards the new horizon. Announced via the PlayStation Blog, the free games for PS Plus subscribers in April will be Oddworld: Soulstorm (PS5 only), Days Gone and Zombie Army 4: Dead War, all of which will be available to download from April 6.

We already knew that Oddworld: Soulstorm was going to be free for PS5 players, as it was announced during Sony’s most recent State of Play, but it doesn’t make its inclusion any less exciting. A reimagining of the classic title Abe’s Exodus, Soulstorm has been one of the most eagerly anticipated games of the last few years and fans of the series have been swept up into a frenzy following the amazing trailers and sneak peeks that we’ve been given over the last few weeks. Keep in mind that this 2.9D platformer will only free to PS5 players only. Now the only question is whether or not to get the awesome Collector’s Oddition as well.

Changing gears a bit (that’s a bike pun), Plus members are also getting the open-world zombie action games Days Gone. Putting you in the biker boots of Deacon, you’ll be tearing across what remains of Oregon, fighting to survive against massive hordes of Freakers (zombies) that want to chase you down for a snack. Days Gone may not sit in the upper pantheon of PlayStation first-party titles (we gave it a 7), but it still makes for a damn good time, especially if you’re into zombie games.

Speaking of zombie games, we’ve got a double dose this month, as the final PS Plus game is the undead snipe-a-thon, Zombie Army 4: Dead War. As a spinoff series to the fantastic Sniper Elite games, Zombie Army 4 swaps out alive Nazi’s for dead, shambling ones. The set-up is as simple as it can get, with Hitler playing around with the occult and summoning an army of undead soldiers to help him win WWII; see, simple. With co-op being a good old time and the sniping mechanics as good as ever, Zombie Army 4 is worth a crack if you’re keen on long-range rifling (we gave it a 7).

If you’re yet to download Final Fantasy VII Remake, Maquette, Farpoint of Remnant: From the Ashes, or at least added them to your library, you’ve got until April 5 to do so.

Do the April games tickle your fancy? What would you like to be included as part of PlayStation Plus? Let us know.